Last Saturday morning I had the pleasure of attending the Chicago Gourmet event in Chicago’s Millenium Park. You know the kind of experience that leaves you in a happy place for the entire remainder of the day, no matter what else happens? It was that kind of experience. How could it not be? With celebrity chefs like Rick Bayless, Chicago food critic Steve Dolinsky and Chef de Cuisine of Bon Appetit magazine, Mary Nolan within talking distance, it was every foodie’s dream come true.

If you’re not familiar with this event, it is one of the premier Chicago events that gathers foodies to this one place where they can try out some of the best dishes from Chicago’s restaurants and top chefs. Live cooking demos, seminars, and tents filled with tastings from these restaurants are set up under tents so that visitors can enjoy samplings of what they can look forward to by dining in those restaurants. Even Target was there to offer tastings of some of their Archer Farms food products. Everyone was sporting the signature red Target bags with the Bon Appetit and Chicago Gourmet logos.

Some people compare this event to a smaller, more gourmet version of the Taste of Chicago that takes place during the hot and steamy summer. I’d have to say that might be true to some extent, but this was different and unique on a level all its own. Garden Gazpacho with Garlic Croutons in the Bon Appetit tent

It was elegant, well-designed and executed with foodies in mind who have a taste for artistically-inspired dishes.

With celebrity chefs like Rick Bayless on the schedule to perform cooking demos and Bon Appetit as the event’s main sponsor, what foodie wouldn’t want to be there if only to soak up all the culinary tidbits of home-cooking information– all to be inspired to go home and make something?

Upon arriving at the event, I immediately went to the outdoor cooking demo by Rick Bayless where he offered up information on Mexican cheeses like queso fresco (Mexican farmer’s cheese), queso anejo (an aged Mexican goat cheese) and even the all-Italian ricotta cheese. For example, he said queso anejo is similar to the Italian Romano cheese in flavor and commercially made ricotta is always drier tha the fresh kind (very true about the ricotta).

After the cooking demo, I went to the Bon Appetit tent to wait for Mary Nolan, Chef de Cuisine of the magazine who I would later interview (that interview will be posted next). While waiting, I tried a couple of different things like the Garden Gazpacho and Mediterranean Tuna Crostini. I was elated after my interview and chat about food {even halal food} with Chef Mary Nolan. Everything else was a bonus.

The tents that featured tastings from area restaurants had outrageous lines that didn’t look as if they were moving too fast, so I bolted for the shorter lines to see what I could taste that was halal as well as quick. There were some interesting vegetarian options I was hoping to try and I really wanted a taste of something from Frontera, but that was the longest line of them all. So I opted for the no-wait line at Lezza for this wonderful chocolate and real vanilla bean gelato. I guess I was having dessert first while everyone else was nibbling their way through lunch first. Next stop- Green & Black’s. Have you ever had their organic, fair-trade chocolate? It’s the real deal. Just read the labels if you’re concerned about anything that contains alcohol, as some of their flavors have vanilla extract as an ingredient. They had some amazing flavors like peanut with sea salt, toffee, chocolate with cranberry…the list goes on. I didn’t realize they had so many different flavors. My last stop of the day was this cooking demonstration by three chefs from some of Chicago’s finest restaurants (none of which I’ve been to, so I can’t comment just yet).

Dirk Flanigan from Henri, Tony Priolo from Piccolo Sogno and Federico Comacchio of Phil Stefani’s 437 Rush were all on stage for the Same Ingredients, Different Kitchens: Innovation with Tradition demonstration. While making things like stuffed zucchini flower blossoms and venison with locally-foraged ingredients, they held lively a discussion about cooking with olive oil some musings about having an Italian background and family.

Overall, I wish I could have attended more of the sessions that day and the next (it was a two-day affair), but I am grateful for what I could experience. Though the average halal foodie will have to skip over the wine and spirits booths and ask about the ingredients in the prepared dishes (some were cooked with alcohol), I still think it’s an event that given the chance to attend, one could learn lots of great tips to can take away for use in home cooking. The numerous demos and seminars give visitors such a uniquely close-up opportunity to see some of the best chefs not just in Chicago, but in the world, do what they love to do.

Are there any foodie events coming to your area that you’re particularly excited about? Do share!

Don’t miss my interview with Chef de Cuisine of Bon Appetit magazine, Mary Nolan. She was so nice, personal and candid about cooking- I can’t wait for you to meet her!

Special thanks to Isabelli Media Relations for their flawless coordination of this event’s publicity. 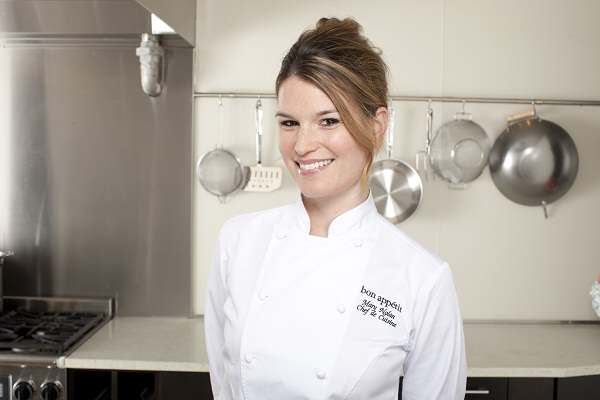 I recently attended the Chicago Gourmet event right here in the Windy City, though on that day it was a rainy city–mostly in the morning.…