When I first arrived, I scoped out where I should be meeting Chef Nolan, at the Bon Appétit tent set near the entrance of the event. It was filled with tastings of select menu items (which you can see here) and chef demos would be set up later in the day as scheduled on the list of events. View of the Bon Appetit tent from the Chicago Gourmet event

I walked around for a bit to get a feel for the place, turned in to the Target booth to get a taste of their goodies by Archer Farms and then proceeded to watch a demo by famed chef of Mexican cuisine, Rick Bayless.

It was a lot to take in, being such a gathering place for foodies.  Everyone seemed so happy to be there and that feeling of excitement towards tasting and learning about great food was absolutely contagious.

I had an appointment to meet Chef Mary Nolan at the Bon Appétit tent and she and I arrived at just about the same time. I recognized her from previous photos I’d seen, and her positive, cheerful personality came out the second we met.

She had an instant smile and was gracious and welcoming, making me feel instantly comfortable with her. We sat right inside the Bon Appétit tent and began chatting about the event, the Midwest, where we are from, etc. It felt like meeting an old friend and wrapped up just as nicely with talk about halal food and where things are going in that arena of the culinary world.

I completely enjoyed meeting her and felt she was very forthcoming about her experience going into culinary arts training with a background in journalism.  See for yourself here–and if you have any additional questions, maybe I can get those answered for you.

{Because the interview wasn’t recorded, I’ve summarized Ms. Nolan’s responses, which may be a bit shortened and not quite word for word}

MHK asked: You have a background in journalism and a culinary degree from the Institute of Culinary Education (I.C.E.). Was that a planned form of study to get you working at a place like Bon Appétit?

Chef Nolan told me that she worked in the publishing industry for Gourmet magazine for nearly five years- first as a sales assistant, then as a promotion coordinator and finally as a copywriter before deciding to take evening classes at the Institute for Culinary Education (ICE)  in New York City while she continued working at the magazine. She had no desire to leave the city so it worked out perfect for her schedule and in ten months she finished her studies there and was later hired to work at Bon Appetit, where she is the Chef de Cuisine today.

MHK asked: For our readers who don’t know what a Chef de Cuisine is or does, can you explain that?

She said that she sees herself as a brand ambassador for the magazine. She brings the brand to life during heavyweight culinary events where she often serves as emcee. She also teaches cooking in a variety of venues for culinary classes sponsored by Bon Appetit. With her bubbly personality and broad smile, it’s no wonder she does this so well.

MHK asked: Did you always think you’d be working with food?

Growing up in the Midwest and being close to Iowa farms, Chef Nolan says that her mother always had prepared foods and so she was constantly exposed to cooking and great food, which is what drew her back in to the food world once she began thinking about her career. She graduated with a degree in journalism from the University of Wisconsin at Madison before going on to culinary school. MHK asked: What’s been your most challenging culinary work yet?

Though she loves cooking and everything about it, Chef Nolan said that restaurant cooking has definitely been the most challenging. Early on in her career she worked at a fish restaurant in Philadelphia, something that was quite new to her. She said it’s physically and mentally exhausting and a pressure-filled environment that may not be for everyone. Though she learned a lot from it, she’s happy to be working with food in a much different capacity at Bon Appétit.

MHK asked: For all of those people desiring to do something, with food who might not really know where to start, can you give them some suggestions as to where to start?

At the core of it all, she says, one needs to be passionate about food and cooking. It’s a lot of hard work. You also need to have a willingness to learn as there’s always something new to discover.

MHK asked: What do you think of Chicago’s culinary scene?

Chef Nolan was really excited about being back in the Midwest. She says the people are great- friendly and down to earth and it all reminds her of home. She’s pretty enamored with some of Chicago’s best restaurants: Vie , The Publican, Café 28, and of course, The Tamale Guy.

(This chef knows her Chicago restaurants!) MHK asked: What are the most basic staples you think every home cook should have in their kitchen pantry?

1) Eggs– because there’s just so much you can do with them; 2) chicken stock– because you can even keep it in the freezer; 3) basic veggies (onion, celery, carrots) for a mirepoix to make soups and stews; 4) milk; 5) chickpeas and 6) good old-fashioned real butter.

I think that’s a great list- so far, my pantry’s stocked….

What other questions might you have asked Chef Nolan? 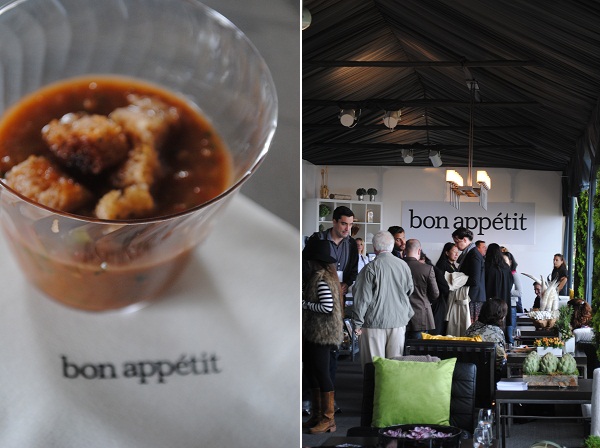 Last Saturday morning I had the pleasure of attending the Chicago Gourmet event in Chicago’s Millenium Park. You know the kind of experience that leaves you in a happy…