Restaurant recommendations can go a long way, but I always take them with a grain of salt. One never knows how another person’s taste buds are guided or what price range is acceptable to another. I like good recommendations, but doing a little research ahead of time usually gives me a bit of an idea on whether or not I’ll make a real effort to actually go.

That said, when in New York City, I was recommended this Mexican restaurant, Rosa Mexicano, open since 1984. I was reminded of this place as I stood in New York’s Little Italy searching for a place to have dinner. A fight between two Italian men broke out, shouting family business issues across the narrow streets to one another and threatening all sorts of things. Who needs the Soprano’s?

That situation nudged me to find out immediately where Rosa Mexicano was located in relation to the current makeshift set of wannabe Soprano actors. I hoped it was nearby, but ended up shuffling into a touristy Italian restaurant that night with food not worth mentioning.

Turns out I had to save Rosa Mexicano for the next day when I was so much hungrier and there wasn’t such a huge dinner crowd.

I toured around Fifth Avenue, Central Park and Columbus Circle, finally making my way by foot to the upscale Mexican restaurant. “This better be good”, I thought…

The interior of the restaurant was an impressive array of colorful indigenous décor, especially with their recent holiday of Dia de Los Muertos (Day of the Dead), which is similar to and coincides with Halloween in the U.S. Prices were high for the basic staples: rice, beans, and guacamole- just to start. Stuff I make at home.

We ordered the $14.00 Guacamole en Molcajete, to be served up in a traditional molcajete, or mortar and pestle. The appetizer was made right in front of our eyes by one of the waiters. He peeled, chopped and mixed up the avocado, cilantro, lime, jalapeno, tomato, and salt. I’ve done that before, just not as fast- and this guy does it all night long. After one look around the dining room, I noticed that everyone was ordering it. It had to be good- they’re well known for the table-side guacamole.

Using the small homemade corn tortillas to dip into this lovely avocado dish, we were highly impressed with how fresh, tasty and savory our tacos turned out. Warm, freshly made tortillas also came to the table with Salsa Pasilla de Oaxaca and Salsa de Tomatillo y Habanero. Both salsas were incredibly flavorful and tasted so delicious atop a guacamole taco!

Our entrees came and I was incredibly surprised with the generous portions and use of seasonal ingredients. It sort of reminded me of dining at chef Rick Bayless’ Chicago restaurants, Frontera Grill or Topolobampo. We ordered the Salmón en Manchamanteles, or Salmon Filet with a Tropical Fruit Mole (Sauce), a grilled salmon served over black beans with zucchini and roasted corn. The mole consisted of  chile ancho and tropical fruits. Another fish dish was a seasonal dish not currently on their menu that consisted of a white fish with pumpkin seeds. Rosa Mexicano says they’ll serve it up again next fall. I like that. Seasonal is good, and my tastes buds could prove that.

Rosa Mexicano has several locations across New York City as well as New Jersey, Maryland, Washington, D.C., Los Angeles and Miami. Apparently, they are growing experts in Mexican cuisine and even have a cookbook and culinary classes to prove it. Unfortunately, if you want the cookbook you’ll have to pick it up at one of their restaurants since they won’t ship it to you.

Make your own guacamole at home until you get a chance to check out Rosa Mexicano for yourself. Disclaimer: I do not recieve complimentary food nor am I paid or persuaded in any format to review restaurants. The purpose of the review is to inform readers and potential restaurant goers of the types of food they could potentially order with regards to a halal diet. 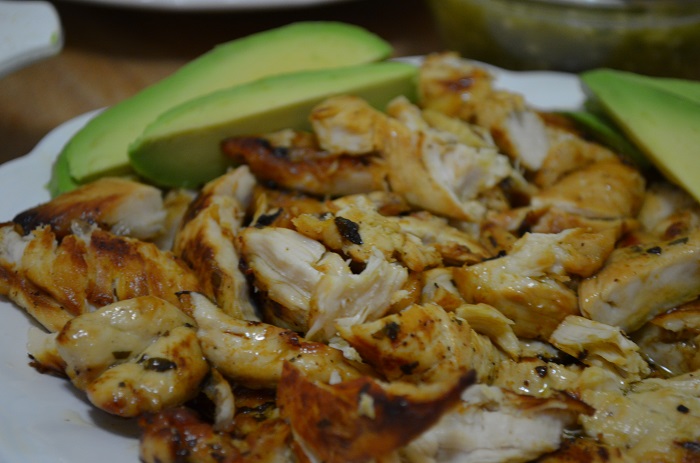 When I went to Irvine, CA last April for Sameer’s Eats Halal Food Tour, Lime Chicken Tacos was one of the recipes on the menu that I demonstrated. I…