I’ve been following Paula Wolfert, food writer and expert of Moroccan cuisine for many years. She has written numerous books on clay pot cooking and Moroccan cuisine, both of which have intrigued me immensly since my first trip there in 1995. Her latest book, The Food of Morocco, is a real treasure of collected recipes, photos capturing the Moroccan landscape, and antectodes of the people she has met over the years of her travels back and forth to the country to study the cuisine and cooking methods. Cover of The Food of Morocco by Paula Wolfert- her latest book, a masterpiece of Moroccan cuisine

Paula was generous enough to share her recipe for Anatolian Purslane, Lamb and Lentil Stew with My Halal Kitchen readers back in 2009. She has extensive knowledge of healthy Mediterranean foods as a whole, but The Food of Morocco really hones in on one country’s approach to its unique cuisine, style of eating and the local varieties of produce, meats and fish. That’s what I loved about the book. It’s not just another book about Moroccan cooking- it’s a scenic package of just about every Moroccan spice mix and edible element one needs to make the traditional dishes that are included the book. It’s as if she traveled the country to preserve culinary traditions that may be in peril due to the influx of commercial foods into the country and the emigration of so many Moroccans to Europe and North America. (above) The Argan Tree argan cooking oil to make Paula’s recipe for amlou, one of the most common uses for the oil

I’m fairly familiar with Moroccan cuisine, but there is one dish in her cookbook that I thought was pretty unheard of here in the states, though it is incredibly delicious and made with super foods like almonds, honey and argan oil: Amlou. Not only was it my pick for this post, but it was also the same recipe Paula herself recommended.

Amlou is a dip that can be eaten with bread or fruit and because it’s a bit syrup-like, you can even use it on pancakes. How healthy of a syrup that would be! Pouring honey over raw almonds in the food processor

Paula recommends using a traditional mortar and pestle instead of a food processor to grind the nuts because the resulting texture will not be as silky. I have to agree because I used the food processor and although it was still absolutely delicious and nutty, it didn’t look the same as the one in her cookbook.

I’ll soon share a recipe for a baked dessert I used combining phyllo dough, fruits and this amlou, but for now I leave you with the basic amlou recipe from Paula Wolfert. For the rest of her recipes, please get your copy of The Food of Morocco and keep it in your culinary library as a source of creative inspiration as well as a preservation of Moroccan food history and photography.

(adapted from Paula Wolfert’s book, The Food of Morocco)

Dry toast the almonds in a small saute pan over low heat until they have somewhat browned, just a few minutes.

To a food processor, add the almonds, salt, oil. Grind until it becomes smooth and well blended.

Through the opening of the food processor, slowly add the honey. Pulse to combine the honey thoroughly.

Remove and use immediately as a dip or ingredient in other dishes.

*Paula says it’s best to store this in an earthenware crock or in a cool place, but not the refrigerator.

Where to Find Argan Oil for Cooking

The Argan Tree. This cooperative made up of 18 Moroccan women is an amazing model of mutual benefit. The women produce and process the oil and receive 100% benefit from the profits after the overhead costs are taken care of. They even share this information on their blog. You can even get argan oil for cosmetic use on their site.

More About Cooking with Clay Pots

If you’re in the market for clay pots or want to know more about cooking in these ancient, efficient pieces of cookware, she’s the expert on it.

I love this video below of Paula at Bram, a clay pot store in Sonoma, California owned by an Egyptian couple. The owner explains some of his experience with his mother’s clay pot cooking and Paula expands on the details of the versatility, use and care for clay pots.

So, do you or would you ever cook in clay pots? What is one Moroccan recipe you’d love to try but haven’t tried before? 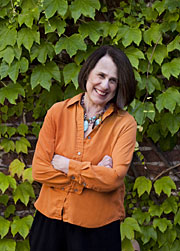 Paula Wolfert, an expert in Moroccan cooking and the award-winning author of cookbooks about Moroccan and Mediterranean cuisine has honored us with her summer’s end recipe for Anatolian…