I’ve been told for years that haleem, the puréed meat and grains dish with South Asian flavors,  is a favorite Iftar dish for so many Muslims observing the Ramadan fast.  Though not a common way of eating meat American-style, (cooked down for hours and combined with grains all puréed together) if you pre-judge it and dismiss it, you may never really experience the potentially satisfying eating experience it offers. It’s also quite nourishing. My version of mildy-spiced haleem

I first had this type of dish among Arabs who called it jareesh. It was spiced with Middle Eastern flavors and made with lamb and barley grains- definitely not as spicy hot, but very good to me nonetheless. Personally, I like my haleem to be somewhere in the middle- not too spicy, but definitely with a kick of flavors added throughout and some heat added on top at the end. I know my version is not traditional, not Hyderbadi style, and not the way someone’s favorite Aunty makes it. It’s just my version that I make, and sometimes change, depending on which ingredients have on hand. There is one thing that never changes, however, and that’s the fact that I use a slow cooker to make it, over the course of about ten hours. Yes, ten hours. Officially. Slow. Cooking. I start out with really fresh lamb shoulder meat with the bones, plus my favorite spices for this dish: turmeric, cumin, Hungarian smoked paprika, salt and black pepper.  You could use chicken or beef, but with chicken you’ll have to be extra careful with any bones; with beef you’ll want to have some fat on it or it’ll dry up rather quickly. To the slow cooker that has already has heated oil in it, I add the onions. Next, add the peppers (either roasted or not- I just happened to have roasted ones on hand) and the tomatoes, too and the spices on top of it all then add the meat, uncooked (or pre-boiled if you prefer it that way) Mix it all together While that is cooking on high heat in the slow cooker, prepare the lentils and barley Soak each in water for at least an hour, maybe more if you like them really soft (barley softens quicker than brown lentils) Add water or broth once the veggies have soften and the meat has browned ever so slightly. Once the meat has cooked long enough, remove all the bones (lamb shoulder is much easier to do than chicken) Next, drain the barley or bulghur do the same with the lentils- drain them of all water (they should be a bit plump). If using red lentils, they don’t need to be soaked. after hours and hours of cooking, it’s time to get out the immersion blender and blend away, at least about 3/4 of the entire mixture somewhat like this- remember, all the bones are out of the meat by now Keep going until you feel it has reached a consistency that you like. It won’t hurt to add more water or broth, either, because you will continue to cook it and keep it warm on the slow cooker until it’s time to serve. To serve, top it with freshly cut jalapeno slices, freshly cut ginger, and freshly chopped cilantro- fresh, fresh, fresh. Some people like to add oil on top- I am not one of those people, but go to town if you like it that way.

1 tablespoon sea salt, or to taste

2 cups water or broth, or more as desired

Warm the oil in a sauté pan. Add the onion and turn up the heat to brown  lightly. Next, add the peppers, tomatoes and garlic and continue to cook down a bit, about ten minutes.

Add all of the spices then stir to combine well.  Add the meat and brown on each side.

Transfer the above mixture to a slow cooker then add the water or broth.

Cook for about three hours on high heat, covered. In the meantime, soak the grains.

Add the grains to the mixture then cover and continue to cook on medium-high heat for an additional two hours, adding water or broth, if necessary.

Remove cover and move some of the mixture to a different pot, or turn off and unplug the slow cooker. Using an immersion blender, combine at least half to three-quarters of the mixture, or until the desired serving consistency is reached. Add more liquid, if desired.

Bring the combined mixture back to the slow cooker and begin to heat again, covered, for at least one hour, on low heat.

Serve in individual bowls with a little bit of cilantro, sliced jalapeños, sliced ginger and a dash of lime on top of each serving. 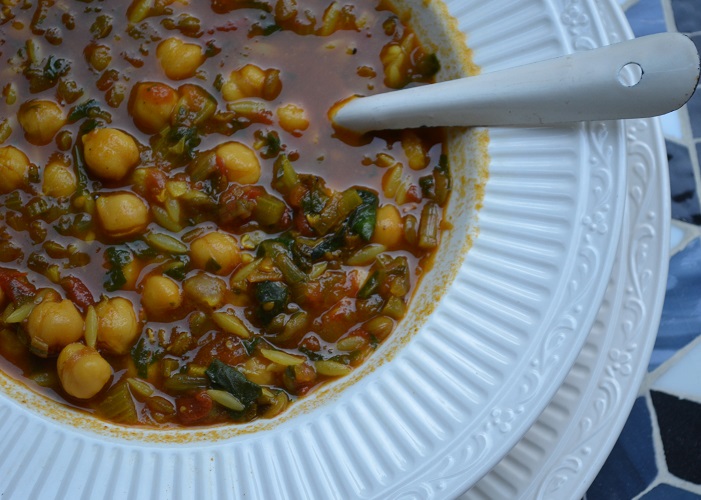 There are so many delicious recipes coming out of the North African country of Morocco and when I was there in the mid 90’s, I… 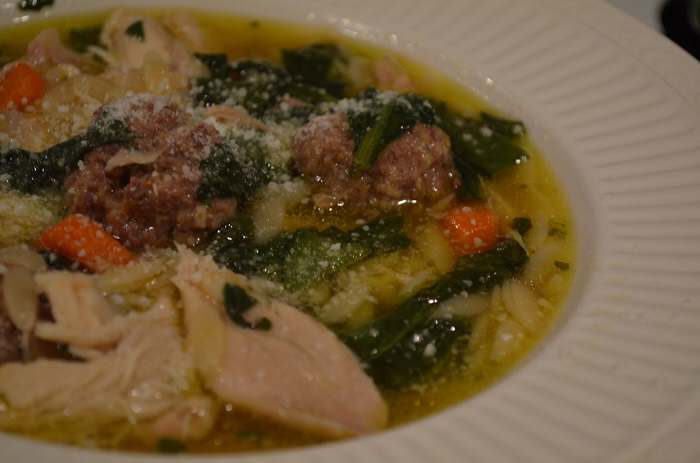