The ubiquitous bread of the Middle East and North Africa, pita bread has found a new home in America and the Middle East due to the introduction of it by the many immigrants who opened restaurants, groceries and ethnic markets, offering the freshly homemade bread that wraps mouth-watering shawarma and kebob sandwiches and selling the bread by the dozen in bags, as well. Today, pita is a household word in the U.S. and is popular among foodies. Pita comes in a variety of sizes and thickness, most of which can all be found in one place at Middle Eastern markets in large cities throughout the country or wherever there is a sizeable Middle Eastern population. 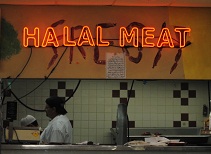 For a city not ranked as one of the largest in the U.S., Cleveland has a lot to offer in the way of halal…