Nadia Hubbi of Sweet Pillar & Co. gives us her take on how two of the healthiest and most traditional nuts of the Middle East stack up in food history, health benefits and culinary use. It’s an interesting look at both walnuts and pistachios, some of the most widely-used nuts in traditional Middle Eastern cooking that are making big waves in American cuisine, too. Be sure to check out her site and consider something as delicious as the chocolate-covered dates for your next hostess gift. The pistachio is a small tree originally from Persia which now can also be found in regions of Syria and Lebanon, among others.

Archaeologists have found evidence from excavations at Jarmo in northeastern Iraq that pistachio nuts were a common food as early as 6750 BC.  Its cultivation spread into the Mediterranean world by way of Iran from Syria: Pliny in his Natural History asserts that the pistachio was one of the trees unique to Syria; and in another place, that the nut was introduced into Italy by the Roman consul in Syria, Lucius Vitellius the Elder (consul in Syria in 35 CE).

More recently, the pistachio has been cultivated commercially in the English-speaking world in such places as Australia, New Mexico and in California, where it was first introduced in 1854 as a garden tree. The same American horticulturalist who brought the Medjool date to California, Walter Swingle,  also introduced pistachios from Syria as a commercial crop in the United States in 1929.  Today Iran, US, Turkey and Syria are the largest exporters of pistachio.

Behavioral eating expert Dr. James Painter at Eastern Illinois University described the Pistachio Principle of “fooling” one’s body into eating less.  The act of shelling and eating pistachios one by one slow one’s consumption, thus allowing one to feel full faster after having eaten less.

In Syria, the pistachio is used more often in sweet desserts rather than in savory entrée dishes.  Commonly used as fillings in cookies, desserts, or as toppings for decorative purposes; the pistachio comes hand in hand with Middle Eastern desserts as a whole.

Walnuts, the oldest fruit tree known to man, dates back to 7000 B.C. bearing the fruit of the Juglans regia. It is a Latin contraction meaning regal nut of Jupiter or nut of “the Gods.” Ancients believed the gods dined on walnuts.

There are two types of walnuts, the “English Walnut” which originated in Persia, present day Iran, Syria and Turkey, and the “Black Walnut” native to the United States.

Early cultivation spanned from southeastern Europe to Asia Minor to the Himalayas and traded along the Silk Road route between Asia and the Middle East.  English merchant marines transported the walnuts for trade to ports around the world and they eventually became known as “English Walnuts” despite the fact that the English never grew walnuts commercially.  Today, the California walnut is known as the top quality walnut for the world.

Walnuts in Syria are translated to mean “nuts of Aleppo” because that is where the abundance of walnuts in Syria grow.  My father recalls a trip down memory lane to a time when the city boys would go outside of Damascus to the suburbs whether during the weekend or summer holiday to study, but instead got distracted by all the walnuts on the ground. (Walnuts in their raw form have a leathery green exterior which makes it difficult to pick them and peel without leaving a green stain on one’s fingers).  Once the children finally removed the green exterior they were faced with another challenge of cracking open the shell to finally unite with the treasure.  They gathered stones and continuously hit the hard shell until the walnuts had no other option but to crack open and expose the fruit delicately protected by its outer shell.  Once they go back home the green stains on the children’s fingers uncovered the fact that the day was spent picking walnuts instead of studying and thus received a scolding by their mothers…

At Sweet Pillar, we tend to use walnuts in a lot of our products mainly because like dates, pistachio, pine nuts and apricots the walnuts is so prevalent in the Syrian culinary world.  In fact a very famous staple mezza dish found in every household in Syria is called “magdoos” which is pickled eggplants stuffed with seasoned walnuts.  And, like any other dish, the more walnuts, the better.
Pistachio and Walnuts are extremely popular in Middle Eastern desserts and so variety trays carrying desserts filled with both are a common way to purchase sweets from Syrian bakeries. 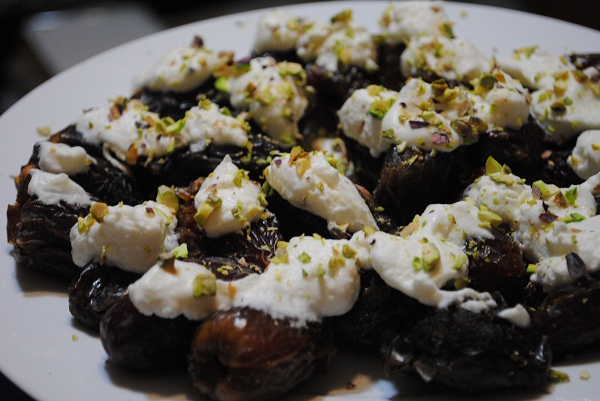 Our latest guest post is by Nadia Hubbi, Founder & CEO of Sweet Pillar & Co. Her chocolate-covered dates captured me so much that I…