I’d heard of the famous dish “Imam Biyaldi” before, but never really knew what the hype was all about.  Being a Sicilian who also loves Turkish and other Mediterranean foods, I thought I had tasted just about every dish where peppers, eggplant and garlic were smothered in olive oil. For some reason, the one I’ve just tasted was different- in a totally delectable way.

“Imam biyaldi” is the Turkish phrase for “the imam fainted”. It is said but not known for sure that an imam, or Muslim spiritual leader, tasted this recipe and was so overcome my the intensity of flavors that he fainted! Well, I didn’t exactly faint but I do agree with some foodies who say this could be the original ratatouille, one of my favorite dishes in the world.

On a homespun tablecloth decorated by vased fresh flowers, Imam Biyaldi was served to us at our favorite ethnic market, the Mediterranean Oasis Mart in Naperville, IL. We’ve been shopping there for years and most recently enjoying generously portioned pita sandwiches stuffed with delights like lamb shish kabob, grilled chicken and grilled sirloin tips. Now, they’ve enticed us further by expanding their menu to include entrees, salads and desserts and even setting up tables in and out on the storefront for their customers to enjoy these foods.

Although our Imam Biyaldi was not served in eggplant shells (the traditional method) it was plated like a salad and served cold with pita bread to scoop.  This is not the store’s recipe below, but that of one of my favorite cookbook authors, Claudia Roden in The New Book of Middle Eastern Food (1972).

1 teaspoon sugar, or more to taste

Prepare the eggplants for filling by cutting each in half lengthwise. They may be peeled or not, as you prefer. Scoop out the centers. Sprinkle the hollowed-out portion with salt and leave to drain in a colander for at least 1/2 hour. Then rinse with cold water and pat dry.

Prepare the filling by slicing the onions thinly. Soften them gently in the 4 TB. olive oil, but do not let them brown. Add garlic and stir for a minute or two until aromatic. Remove from the heat and stir in parsley and tomatoes. Season to taste with salt, and mix well.

Stuff each of the eggplant’s hollowed-out portions with filling.

Arrange the eggplants side by side in a large pan. Pour the 1/2 cup oil over them and enough water to cover (about 1/2 cup) mixed with a little sugar, salt to taste, and the lemon juice.

Cover the pan and simmer gently until the eggplants are very soft, about 1 hour. Remove from the heat and allow to cool. Turn out onto a serving dish. Serve cold. (Serves 6)

So, if you’re ever in the suburbs of Chicago, you must visit the Mediterranean Oasis Mart. You’ll probably be welcomed with a glass of mint tea or mango juice, just like you’ve come to visit a relative. Shop around then sit down to enjoy one of the many delightful dishes on the menu. No matter what you pick, I don’t think you’ll be disappointed.  Oh, and tell Abu Shoosha we sent you…

*Disclaimer: The opinions expressed here are entirely based on the author’s own personal tastes, which may obviously be different for others who try the same product(s). The reviewer also declares that she has not received any monetary or non-monetary compensation from a restaurant or food product company for writing any review. 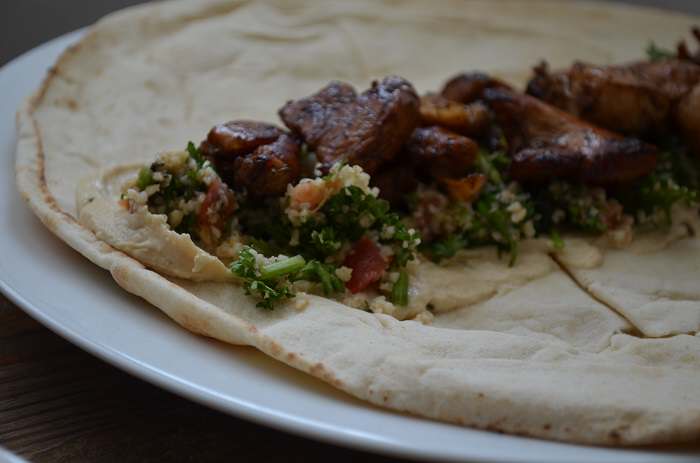 I had no idea what a hit these pita rolls would be. They seemed so easy to make and with such a familiar taste to…