I’ve wanted to come to this restaurant ever since I first heard of its opening a while ago. It’s local (to me) here in Chicago and now considered a gem of a restaurant in our city. An addtiion to the line of Rick Bayless restaurants, it’s one of the newest he’s added to his very popular, Topolobampo (a favorite of the Obamas), Frontera Grill, and his line of quick sandwich shops in Macy’s stores, Frontera Fresco. storefront of Xoco in Chicago

We originally wanted to go to Topolobampo for dinner, but the waiting list is 6-8 weeks out- doesn’t help when you’re deciding this at 5pm on a Friday night.  Sometimes you can get a seat for dinner at the bar (not the alcohol-type bar, just referring to seating), which is a lot of fun because you can see the kitchen from there, however, it’s also recommended to make a reservation 6-8 weeks ahead of time. Finally, our plans unfolded to head out to Xoco on a Saturday afternoon for churros and real, authentic Mexican chocolate drinks. I knew that’s all we would head out there for because the rest of the menu serves up a lot of sanwiches, or tortas whose main feature is pork. They also serve up caldos, or broths (soups and stews), but those are also animal based and if you’re following a completely dhabiha halal diet, you won’t be interested in those, either. They also serve up breakfast empanadas (turnovers) and chilaquiles (eggs cooked with tortilla chips), though I’m not sure if any of it is cooked in vegetable oils. I was simply there for this treat and happily discovered that the churros (which are a sort of fried, long doughnut covered in sugar and cinnamon) are not cooked in lard (pork fat). They are fried in corn oil- maybe not the best for health, but the taste goes well with Mexican food (although I believe they originated in Spain, the last place I’ve had the best tasting churros).

My Aztec hot chocolate was delicious and not too sweet, which was perfect for pairing with some very sweet and sugary churros. I think I even inhaled a bit of the chile spice in the drink, but I had to have the adventure of tasting something similar to what Vianne Rocher would have made in the movie, Chocolat. No reservations are taken. You can choose to take out or eat in. I like their system of giving you a number (for seating in) as soon as you walk into the order line. Very efficient. 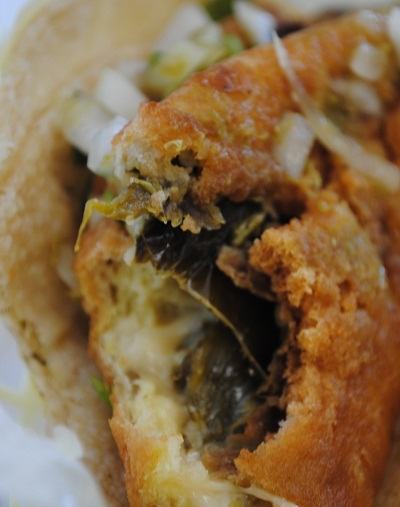 I absolutely love Mexican food.  Having lived and studied in Mexico during my college days and since traveled to both the Yucatan Peninsula and the Jalisco…